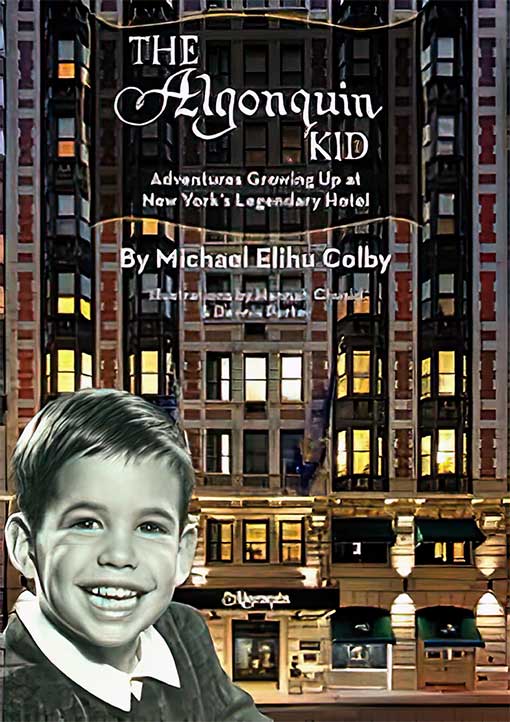 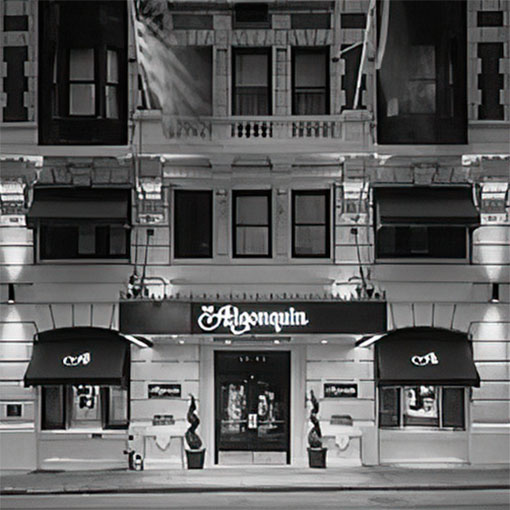 The Algonquin Hotel back in the day

[All lyrics by Michael Colby]

The true story of Michael Elihu Colby whose childhood days at Manhattan’s famous Algonquin Hotel comprised a vivid tapestry of encounters with glittering Broadway, Hollywood, and recording stars: from the Marx Brothers to Ella Fitzgerald, Laurence Olivier to Leonard Cohen, Helen Hayes to Maya Angelou. In years to come, Michael would find his own place in the world of Manhattan musicals, rehearsing his own shows—with future Broadway luminaries—at the hotel.

“It is such a fun and enriching experience reading The Algonquin Kid. I love the way Michael assembled the stories and shared his own creativity and talent along the way. He has preserved an important part of history that deeply resonated with me. (And I would have felt that way even if I weren’t in the book). So much of that era has passed and it only lives again when someone takes the time to save it, like Michael.” – Michael Feinstein

“I re-opened the Oak Room as a cabaret venue in 1981 and was fortunate to share the “stage” of this unique hostelry with the Colby boys and the Bodnes. Everyone on the scene from the owners down to the Algonquin cat was part of a special ongoing piece of daily theatre populated by a raft of fascinating stars, featured performers, and guest appearances. The Algonquin Kid captures it all. It is very entertaining.” – Steve Ross

“Having published some of Michael’s stories about the Algonquin, I can attest to the great pleasure they have brought to our readers. His vivid descriptions make you feel like you are part of his family, reliving a glorious past. The Algonquin Kid is a unique opportunity to visit the bygone world of glamour and share behind-the-scenes anecdotes that entertain and amuse. TheaterPizzazz.com is proud to have been a champion of Michael’s enthusiastic writings that have resulted in this book!” – Sandi Durell, Publisher/Editor TheaterPizzazz.com

“I can’t tell you how thrilled I am that you decided to write a book on your experience growing up in the Algonquin Hotel. It was where my husband courted me when we were dating and it has brought back wonderful memories of this time and the people I met there, the “crème de la crème” of the publishing industry.” – Roslyn Targ, literary agent for Samuel Beckett, Jacqueline Kennedy Onassis, Erich Maria Remarque, Henry Miller, and Saul Bellow; wife of William Targ, editor of Mario Puzo’s The Godfather.

“The Algonquin Kid is a must-read for anyone who loves the theater, loves New York or any combination thereof. Through the eyes of a child, Michael Colby gives a bird’s eye view of growing up among some of the great theatrical and literary greats of the 20th Century, the like we will not see again.” – Larry Hart II

“I could not put the book down and finished it before checking out. Colby is an excellent storyteller. Michael had an extraordinarily close relationship with his grandparents, who owned and lived at the hotel for more than 50 years. If you have never stayed at the Algonquin before, this book will make you want to.” – Mike Cohen, Mike Cohen Travels @ http://sandboxworld.com/

“Michael Colby’s memoir is an honest, informative, and remarkably entertaining piece of work that shines a bright light on one of New York City’s long-standing institutions. The Algonquin Kid’s tale of history, show business, the hotel business, Manhattan, Broadway, and family is full of genuine warmth and laughter. Truly a significant addition to the legacy of the arts in America.” – Raymond Benson, author of The Black Stiletto novels and several 007 adventures

NY Times: Finding a Home, and a Muse, at the Algonquin Hotel, https://www.nytimes.com/2015/04/01/nyregion/finding-a-home-and-a-muse-at-the-algonquin-hotel.html?_r=2